The Fort St-Jean Corporation is responsible for looking after the Royal Military College Saint-Jean (RMC Saint-Jean), which has over 350 years of military history!

Located alongside the Richelieu River, this 48-hectar site is listed as a “National Historic Site of Canada” since 1923. It is open to the public and features a museum and numerous artefacts.

Out of the 37 buildings located on the site, six are formally considered Federal Heritage Buildings. There is also a “Historic Square”, which is made up of four oblong buildings that were built back in 1839.

A team dedicated to preserving and highlighting our heritage

This unique estate is managed by the Property Assets Management (PAM) team; they are responsible for maintaining and developing the site. The team is also dedicated to renewing, enhancing and highlighting the Fort Saint-Jean’s historic site using sustainable methods.

With support from a seasoned team of professionals with different specialities, the PAM team conducts preventative maintenance and repair work to buildings and grounds, and carries out a variety of construction projects.

The PAM team is also responsible for taking care of the power station, which provides heating to the entire estate. What’s more, they also take measures to save energy and manage the environmental aspect of the FSJC‘s activities.

A summary of the Fort St-Jean Corporation’s grounds:

An overview of the Fort Saint-Jean

The Fort Saint-Jean is located next to the Richelieu River in Saint-Jean-sur-Richelieu (Quebec), and around 40 kilometers southeast of Montreal. Built in the 18th century, the remains of its walls are still standing, as well as its masonry foundations, traces of its posts and boundary ditches. What’s more, the remains of the fort built in 1776 can still be seen today; the two bastions are particularly visible. The boundaries of the site are similar to the ground contours of the forts built in 1748 and in 1775-1776.

Why it’s the one of Canada’s National Historic Sites

The Saint-Jean Fort was recognized as a National Historic Site of Canada in 1923 for the following reasons:

Between 1665 and 1666, the French built five forts along the Richelieu River to protect them from the Iroquois’ attacks. The first fort was built in 1666 and abandoned in 1672, but its exact location is still unknown.

The French returned to the fort in 1748 following the War of Austrian Succession. During the same year, engineer Gaspard-Joseph Chaussegros de Léry Jr. built a new fort in Saint-Jean. The fort featured a palisade around 3.5 to 4 meters (12 to 13 feet) tall, and a bastion on every corner with cannon embrasures. With exception to its masonry foundations, the entire fort was made out of wood.

In 1760, the French abandoned the fort and burnt it to the ground. Nevertheless, the surrounding area remained a prime location as it was strategically located on the road leading to Montreal. During the American Revolution in the summer of 1775, the fort was built once again to provide defense against the Americans’ canon shots.

These buildings have been at the heart of the Royal Military College Saint-Jean since 1952.

Sources : Historic Sites and Monuments Board of Canada, Minutes, 1923, November 2008. 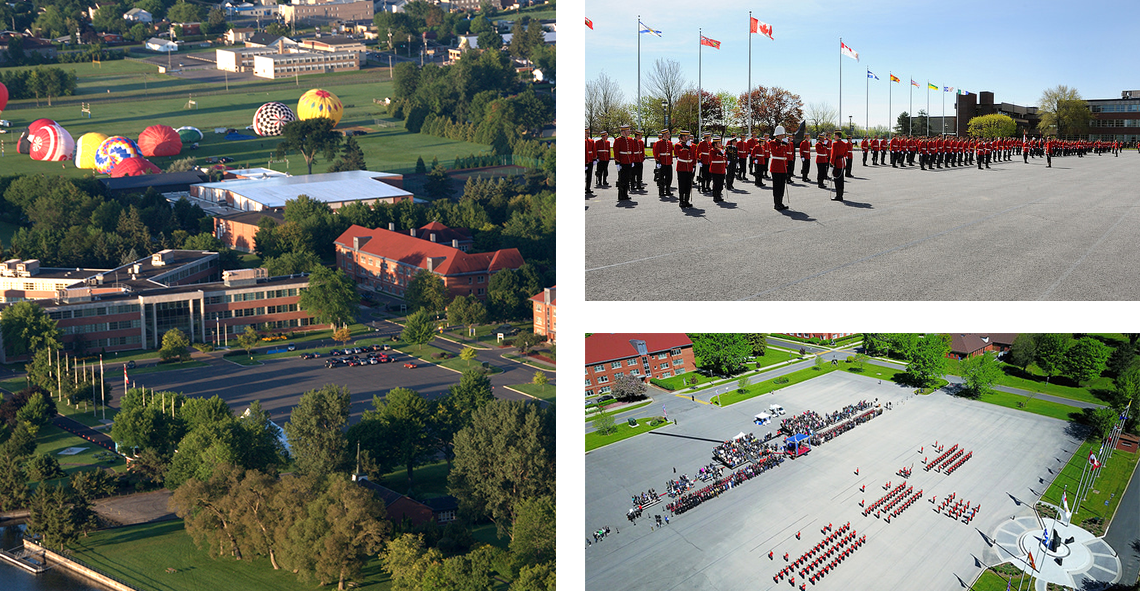 There are many key elements that make this majestic site a historic jewel, including:

“ Several of our foreign guests pointed out the quality and cleanliness of the installations and the delicious cuisine offered throughout the event. ”